Never let it be said that this column fails to gloat in the sacking, vilification and hopefully total ruin of people who we don’t like.

I have listed three such examples here but in such brevity that each can be read within two minutes as part of a weekly ritual you may like to take part in. Or perhaps you can just use some tips you glean here to start your own confected hate mob? Lockdown-rules-observing fun for the whole family!

Cancellation 1: The strong, (too independent) woman
Gina Carano played the character Cara Dune in a Disney plus Star Wars spinoff series called The Mandalorian until she wrote the following on social media:

“Jews were beaten in the streets, not by Nazi soldiers but by their neighbors…even by children. Because history is edited, most people today don’t realize that to get to the point where Nazi soldiers could easily round up thousands of Jews, the government first made their own neighbors hate them simply for being Jews. How is that any different from hating someone for their political views?”

There wasn’t a lot to work with here but Carano is a Trump supporter so it would have been rude to waste the opportunity. Carano is comparing the experiences of Jews circa 1935 with current hatred towards Republicans in the US. It’s too early in the revolution to claim Republicans should be purged so we had to go down the route of implying there is no hostility at all in the western world towards conservative views. Which, QED means Carano is claiming that there was also no hostility towards the Jews. Evil! Abhorrent! Holocaust denier! Cancelled!

Lucasfilm said there were no plans to give her another job and that “her social media posts denigrating people based on their cultural and religious identities are abhorrent and unacceptable.” Sadly American hate-commentator and Orthodox Jew Ben Shapiro is getting her to make her own film for his company the Daily Wire. Carano said she has “only just begun using my voice which is now freer than ever before, and I hope it inspires others to do the same.” Disgusting.

Success rating: 3/5 (Still has a job in acting but at least won’t be touched by Hollywood)

Cancellation 2: The PR man who couldn’t keep up
Gordon Beattie was the founder and chairman of one of the UK’s biggest PR companies until he posted the following on LinkedIn: 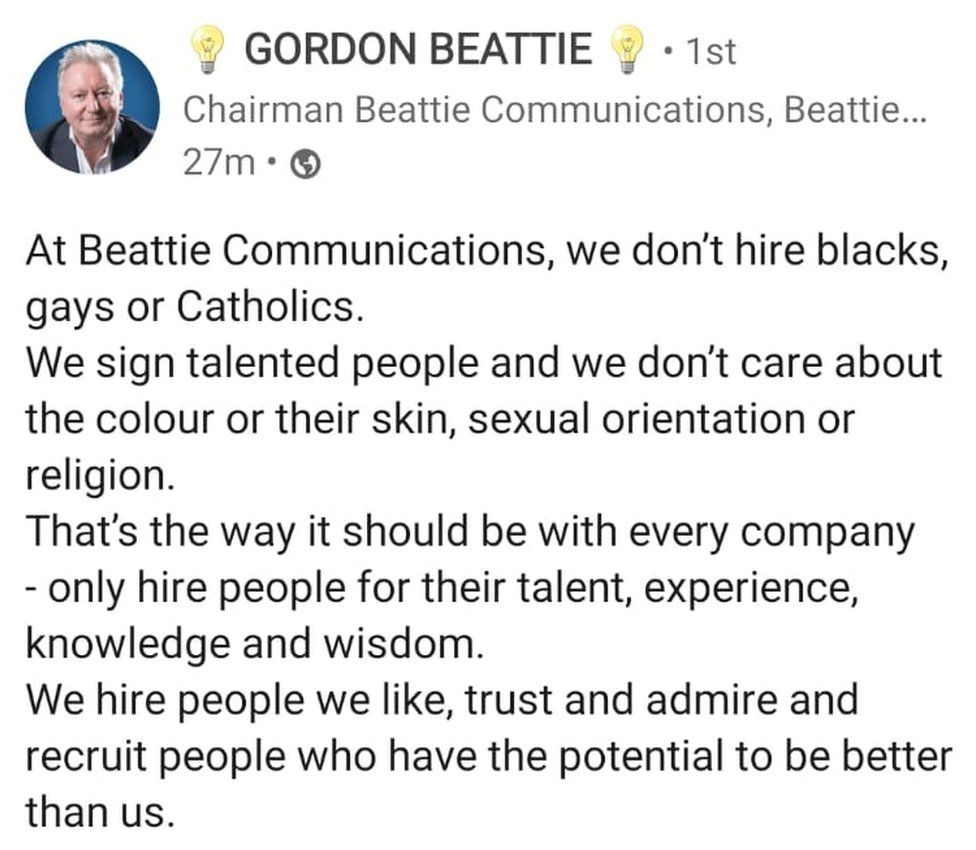 Sadly it’s not quite illegal yet not to exclusively hire blacks, gays and catholic-background atheists so we had to go down the standard route of not telling you what specifically was wrong, but just implying it was so disgusting that you must be an incorrigible racist if you didn’t notice it. Mr Beattie said he was “truly sorry” for his “inappropriate” language and was forced to quit the company he started 40 years ago. The CEO of Beattie Communications, Laurna Woods, said Mr Beattie and the entire team had been devastated by the consequences of the LinkedIn post: “There can be no excuses for the language he used or provocation exercised and he acknowledges that his actions, however well intentioned, were not only reckless, but out of touch,” she said. Was it a provocation to suggest positive discrimination is discrimination? Or reckless because he might have accidentally pressed send after writing the first line? We don’t know and you’re not supposed to think too much about it. It was just wrong, ok?

Success rating: 5/5 (Fired from the company which bears his name – result!)

Cancellation 3: Hats off to the family
Dr Seuss became one of the most popular children’s authors of all time with books like The Cat in the Hat and Green Eggs and Ham.

The American author had used a lot of white people in his books, or people-like Things, and had consistently depicted non-westerners, or non-anywhere-real-on-earth Things, in stereotypically non-western garb, or entirely invented imaginary clothing, which is obviously a gross form of sartorial racism. Until we say otherwise, all races should be depicted in western dress (to show they’re equal) but westerners should never be depicted in non-western dress (cultural appropriation). Except when the colourful peoples of distant lands should be shown clad in their exotic finery, in happy contrast to our stultifying greyness because we never willingly experiment with our clothes.

In a statement timed to coincide with the late author’s birthday (nice touch), Dr Seuss Enterprises announced they were pulling a large number of his books, adding: “Ceasing sales of these books is only part of our commitment and our broader plan to ensure Dr Seuss Enterprises’ catalogue represents and supports all communities and families”.  This self-cancellation was all the more beautiful because it came out of nowhere and swiftly reached the White House. President Biden omitted any mention of Dr. Seuss from his official proclamation to mark “Read Across America Day”, breaking the tradition started by Saint Obama.

Sadly thousands of racists bought his books in protest, sending them to the top of the Amazon books charts. Ebay at least has a less liberal approach to cartoon cat-based racism-in-hats and banned people from listing them. The marketplace giant has previously shown itself to be an ally of black people by banning Martin Luther King memorabilia and black dolls in order to fight racism. Geisel, to give the Oxford-educated American his real German name, cunningly masqueraded as an anti-fascist activist during the safety of World War Two. When literally no one even thought about racism, let alone fought it.

Success Rating: 4/5 (Already dead, but he was cancelled by his own children)

N.B. If you know anyone who even questions the fact that this sort of thing is going to usher in a society without prejudice then please send their name, email and employer’s name to [email protected]

Enjoying The Critic online? It's even better in print

What to read next

Using the Force against wokeness: A galactic scandal for Disney

No place at the bar for challenging woke politics

Moping about Muppets: Another humiliation for Disney